Could you give a bit of background of your relationship with Newcastle Startup Week and what originally attracted you to becoming involved?

My relationship is that I was a speaker at Newcastle Startup Week in 2017 and also supported it more broadly through our network.  Why did I get involved? The importance of bringing people together, particularly to learn with one and other is significant, and I see it as a great opportunity to showcase the North East, and bring people and organisations together.

Could you share with us what previous experience (if any) you or your organisation has had with past NSW events?  Is there any key highlights, or a story that stands out to you?

We’d hosted a Curry Club as part of the startup week. So one of the organisations I’m involved in is Asian Business Connections and we, as I say, hosted a curry club and at an armed forces location and that then .. we were able to promote startup week, bring people together and that was a really good event.

Thinking about this year, why is it important for your company/organisation to be involved with NSW this year?

Key reason is it brings, and I’m going to reinforce — so what I’ve said is quite repetitive, but it’ll reinforce .. so this year, against a backdrop of things like Brexit and various other uncertainty, hosting an event like this is really, really important and once again, it is going to bring lots of people together, to showcase what the North East has to offer; and also provide insights, opportunities to network, and advice and guidance around how to start and grow your business.

When thinking of the impacts of NSW has made; what are the first things that come to mind?

Generally speaking, how do you evaluate the contribution NSW has made to entrepreneurship within the region?

We don’t evaluate anything … we don’t.  But, fundamentally what NSW has done is brought lots of different parts of the community together, so providing both a platform and environment for people who are either thinking about business, who have existing businesses or are service providers under one roof, fundamentally; all behind a common cause and also extending that more broadly and widely to students and such like.

Personally speaking, Could you share with us a personal reflection or highlight from your last involvement or engagement of NSW?

Well yes, in that I delivered one of the talks.  What I do after a talk is reflect upon it, the feedback was fantastic.   So it was really, really positive. However, I was able to improve some of that future speeches alongside that.  And also, one of the things we have is an enterprise charity, so we’re able to link some of the students through that to NSW.

What positive message do you think NSW sends to people within the region?

Quite a significant one; in that, once again, we’re promoting and showcasing all the things that are great within Newcastle and the region.

Generally speaking, what makes Newcastle and the North East different as a place to do business, and where do you think NSW plays in that conversation?

So things like quality of life, things like people I think are two of the biggest contributors to our differentiator within Newcastle and both of which are promoted through NSW.

So you think NSW is essentially an enabler for those kind of conversations?

That we’re open for business. It’s a place and a region where there’s lots going on, and that people should consider Newcastle as a venue to start and grow business.

How would you characterise the impact that NSW has made to the local tourism or the hospitality trade?

Quite significantly. Because, naturally, it’s bringing people to the area. People are using and utilising the various hotels and such like. And actually, because it’s over five days, it means people get the opportunity to experience a lot of the tourism, leisure and hospitality.

Do you have any specific examples?

We had people from India who have come across via the Chamber of Commerce in India in 2017.

How would you characterise the impact and value NSW has made to the local cultural identity of Newcastle and the North East region?

The North East is historically renowned for being an industrial region, we came up with so many inventions; we have so many pioneers.  And, fundamentally, NSW; once again, showcasing all the things that we are good and great at.

How would you characterise the impact of NSW has made to young adults or those in school?

Well I think I mentioned … we have a charity called “Pie Charity” [SIC], which is primary inspiration through enterprise and it introduces enterprise activities into primary schools where the pupils experience setting up a business first-hand.  Part of that exercise and experience is, and has been, these students being encouraged to attend NSW; and they’ve been there, so it’s been great.

Could you share with us any examples of any growth business that have scaled since attending NSW?

Yeah, there are a couple of businesses that I’m involved with. So, my SME Centres of Excellence* have scaled as a consequence of going, well not directly, but as-in have scaled having attended.

Is NSW a driver for employment opportunities in the North East?  Why do you think this?

Yes. Because it’s showcasing lots of the organisations that exist here, and as a consequence; it demonstrates the broad and varied opportunities that exist within the labor market and, once again, promoting the North East.

How do you estimate or characterise the value of your involvement with NSW?

The opportunity to better understand what is going on, more broadly, within various sectors; learn from people who have been there, done it, got the t-shirt and fundamentally, get an opportunity to connect with hundreds of like-minded people.

Concretely speaking, what were the direct benefits for you/your business or organisation in being involved with NSW?

Interest. It created interest.  So yes, as a consequence of featuring and being involved.  There were a number of people. For example, the Curry Club event we hosted was attended by 100 people. 70-80 percent of those people were new people to our networking events.

What kind of time frame was the 100 people?  Was it a day, over a few months?

Over a day. 100 people attended a networking event that we had organised with NSW and 70-80 percent were new.

Would you characterise your involvement with NSW as brand engaging? Brand awareness?

Has your engagement or involvement with startups changed since attending NSW?  And if so, why? Have you changed the way you work with startups?

We’re probably supporting them a bit more by having a better understanding of startups needs and requirements.

So, what is it that you couldn’t have done before, that NSW has enabled you to do now?

Well, it allows us — we support lots of startups, that’s what we do.  Our support programme was improved for startups.

What should Newcastle Startup Week aim to do better at?

I think I would like to see more engagement with schools. We should use this opportunity to further influence education at schools, so that young people understand the benefits of starting a business and how to go about it.

One of the past attendees, especially when it comes to schools said that: It’s okay to fail.  Would you share this sentiment?

It depends on what you mean by “okay to fail”. I think you should never aim to fail.  If you’re setting out to fail, then you’ll never, ever gonna succeed. I think … That’s why I’m very hesitant … when somebody says “Let’s promote failure” – I don’t share that sentiment.

Don’t get me wrong, I’ve learnt lots of lessons.  There’s been lots of unsuccessful businesses, and things that I’ve done; but, I put it down to learning experiences.  The very fact that you are suggesting to someone “Let’s fail”, in itself, I just don’t think it is a good message.

Do you have any other comments you wish to share with us?

Fundamentally I think that NSW makes a significant and sustained impact to the whole community and it provides a common purpose for people to get behind and underneath and allows us to promote the positive opportunities and traits of our North East, and I’d like to see it grow.

You know, I’d like to see it not just be a one-off; five-day event. I’d like there to be continuous engagement throughout the year, and then culminating into this, you know, big event.

Looking for something else? 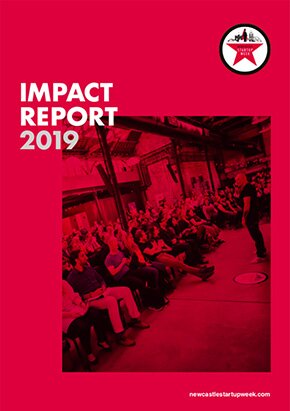